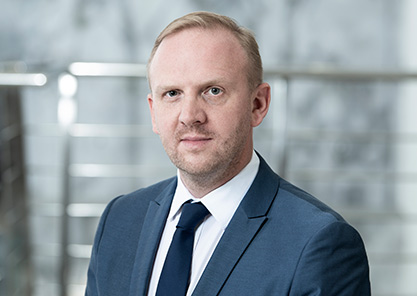 A graduate of the University of Gdansk Faculty of Law, he has been working as an Attorney At Law since 2007. He is experienced in providing legal assistance to medium and large business entities, in particular from the energy & utilites sector (trade/sales and generation of Energy&gas) and in building construction, including the issues of competition and consumer protection law and public procurement. Michał Sznycer specializes in the broadly understood ongoing legal assistance, providing legal support to Management Boards and corporations, legal advise to the wholesale energy trading sector including EFET contracts; he is well acquainted with the local market issues including trade in property rights (PMOZE, PMGM, PMEC, PMEF and those resulting from the greenhouse gas emission allowances) and legal issues of retail (in all tariff groups), including advisory services in the TPA process.

Between 2007 and 2009 Michał Sznycer was in charge of the Legal Department of ENERGA-OBRÓT S.A. – a company trading in energy developed as a result of unbundling of the Polish energy market. Since 2009 he has been an active member of the Association of Energy Trading (TOE) – Poland’s biggest association of energy trading companies. He’s currently a member of the Internal Audit Comitee of TOE, as well as a member of the working group for micro-installations, of the RES CHP Efficiency Task Force and a member of the Committee of Good Practices for Energy Sellers established within the Association under the auspices of the President of the Energy Regulatory Office (ERO/URE). He was also in charge of the team that developed the Customer Verification System for the energy retail market in Poland.

Between 2007 and 2011 he coordinated and provided legal assistance for one of the RES generation companies of ENERGA Group; among others he participated in taking over some of the biggest hydroelectric sources in Poland (2007) and coordinated and conducted, in terms of legal issues, the consolidation of the hydroelectric power plants segment within this group (2010).

Since 2010 he has been participating in advisory and analytical works related to the development and implementation of changes regarding energy regulation issues, including so-called “Little Tri-pack”, and later – the RES Act. As the MGS Partner he collaborated closely with technological companies, among others with regard to invention management, innovation implementation and commercialization, legal services with regard to intellectual property rights and to business and corporate law. He provided legal support in the implementation of the sale of services covered by the broadly defined energy efficiency and electricity demand and supply management (Demand Response – DR / ADR) as well as in the companies operations on the ESCO market. In 2010 he was a co-founder of one of the first concepts that allowed sale of electricity generated from renewable sources by prosumers in Poland. He also participated in the analysis of legal barriers regarding the development of prosumer energy industry.

Since 2007 he has been involved in works on changing the provisions of the Energy Law and its implementing acts, especiallyt the new RES Act od 2015/2016 and the Energy Efficiency Act; in works on developing a draft of a General Distribution Agreement (including comprehensive services), energy and gas market standard agreements, a new model of energy market in Poland and a new Energy Law.

He is the author of articles and studies on energy, construction and public procurement law; he conducts training sessions and workshops addressed to the energy and the construction infrastructure companies. He is an active member and observer of creating a new regulatory environment for the Polish energy industry. He fluently speaks English.